Skedsmo Bilopphugging and Ole Martin Antonsen handle and recycle over 5,000 discarded vehicles every year. One important task is to help ensure that material and energy recovery is at least 95%. Photo: Benjamin A. Ward

A vehicle can no longer be said to be at the end of the road. Once dismantled, a vehicle can now drive forever in the circular cycle. Which means green business. In a industrial area in Skedsmokorset lies Skedsmo Bilopphugging, a part of the Ragn-Sells Norway operations.

The sound of metal being mashed, hard plastic cracking, and glass being crushed rings in your ears. In the slightly dusty, but orderly and well-protected ‘vehicle abattoir’, the wrecks are lined up in rows, slightly sad and abandoned, with different stories and fates, after a life on the road.

Now they wait to be stripped and scoured of all value, for the best.

The last journey of a new Tesla

– It is a brutal sight when a vehicle finally ends up here, but we break well over 400 vehicles a month and are used to it, says Svein Tore Sund, responsible for parts sales at Skedsmo Bilopphugging and Ragn-Sells.

Figures from OFV, the Information Council for Road Traffic, show that last year the Norwegian vehicle fleet consisted of nearly 2.8 million registered cars. As many as 140,000 vehicles are broken every year throughout Norway. Many of them are nearly new. This is done when a claim is estimated to cost between 60 and 70 per cent of the vehicle’s market value.

With used parts from these modern new vehicles, it will be possible to remove this ceiling and more vehicles will be repaired, contributing to increased reuse and a boost for a more circular economy, with the result that we are using natural resources and products efficiently and for as long as possible, in a cycle in which minimum resources are lost. 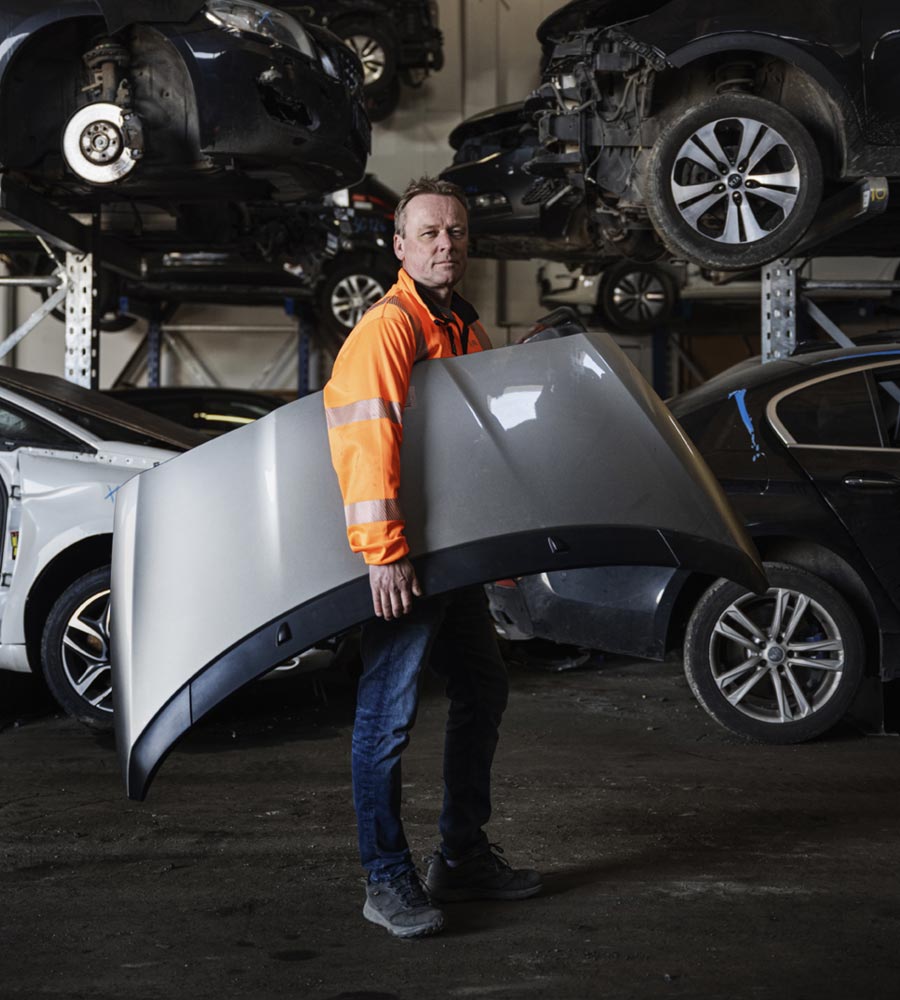 The sale and reuse of original vehicle parts is a green focus area. Skedsmo Bilopphugging’s warehouse in Auli usually has around 50,000 parts. They are mainly sold online, according to Svein Tore Sund, who is responsible for parts sales at Skedsmo Bilopphugging and Ragn-Sells. Photo: Benjamin A. Ward

In the old days, when recycling and recovery were still foreign words, vehicles were compressed to form a small block. This was not environmentally friendly. On the other hand, modern vehicle breakers are both green and digital, and work more efficiently subject to greater regulation. The work involves both recovery and reuse.

When more recent vehicles are broken, usually insurance cases, fully useable parts are removed and sold at half the price of new ones. Older vehicles are carefully emptied of all environmentally harmful liquids and the metals are recycled as manhole covers, frying pans, bikes, lampposts and nails.

– This means that the main environmental impact of a vehicle is when it is made, says Sund.

The automotive industry has great potential for more circularity. Figures from NBF, the Norwegian Automotive Recycling Association, show that, of all repairs performed, used parts are used in a meagre 2-4% of cases. The rest are new. The corresponding figure in Sweden is 10-12%.

However, there are positive signs.

– More people than we thought are now open to the idea of used vehicle parts. We are seeing growing awareness of reuse, resulting in higher demand from the professional market, companies, and private customers,” says Svein Tore Sund.

With both sustainability and business in mind

Inside one of the workshops in Skedsmokorset, the sound of a weak DAB radio competes for attention, but it quickly loses out to drills, pumps, and extraction fans. The air carries a sweetish odour of petrol, engine oil, screenwash, and a number of other environmentally harmful liquids that are laboriously drained from the vehicles.

Skedsmo Bilopphugging, which also has branches in Kongsvinger and Auli, was acquired by Ragn-Sells in 2019 as three of a total of twelve Norwegian divisions in the waste management group’s new focus on green recovery and sale of used parts.

In Auli, the vehicles, including electric vehicles, are expertly dismantled, prepared, photographed and registered digitally for sale and for new adventures on the road.

– This is a perfect example of synergy between finance and the environment. We can earn money on this while respecting the environment, managing everything safely, and striking a blow for the sustainable, circular economy, says Svein Tore Sund. 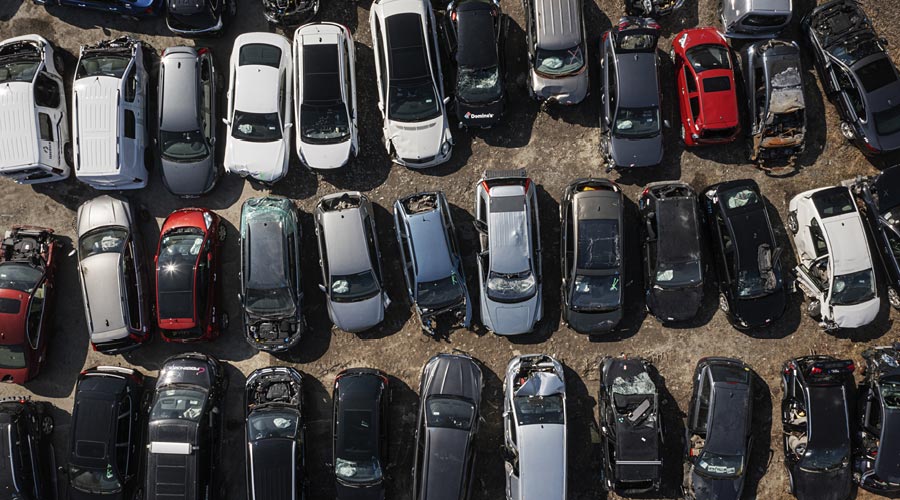 The Norwegian vehicle fleet consists of nearly 2.8 million registered cars. As many as 140,000 vehicles are broken every year throughout Norway. Many of them are nearly new. Photo: Benjamin A. Ward

Insurance companies influence the behaviour of vehicle repair centres and the automotive industry and help boost the green circular economy.

Last year, the Norwegian insurance companies Tryg and Gjensidige carried out a pilot project in which some repair centres used original parts instead of new ones. The initial target was to reach 10% used parts in repairs.

– The results from the first few months of 2021 show that this is achievable. Using more used parts to repair vehicles is a win-win situation for all parties, says Linn Beathe Hæreid, Sustainability Specialist at Tryg.

At the same time, it has been calculated that the used parts lead to a considerable reduction in emissions.

– Of course, there is no compromise on either quality or safety when used original quality parts are used for repairs. However, this type of reuse produces climate gains, financial savings, and more work for the repair centres, she adds.

The green interaction between insurance companies, the recycling industry, vehicle repair centres, and customers is expected to produce further results in the near future.