The recycling symbol – part of our brand

Every day, thousands of green trucks roll down the streets of Sweden, Norway, Denmark and Estonia. Many people associate these distinctive green trucks bearing the recycling symbol with Ragn-Sells. But how did it actually become a part of the Ragn-Sells identity?

This year, 2022, marks 50 years since Gary Anderson designed the recycling symbol, but it was not until 1999 that it started to appear on Ragn-Sells’ trucks.

“Our company name didn’t say that much by itself, so we decided to add the recycling symbol to strengthen the identity of the company. For us, it symbolises our never-ending work, both then and now, to feed ever more resources back into the cycle,” says Folke Jackson, who was Ragn-Sells’ communications director at the time.

The company name Ragn-Sells came about in 1968, with most of the companies throughout Sweden acquired in the following years. In total there were 40–50 companies, all with different names, so in order to achieve cohesiveness within the company, it was decided to use a graphical profile to reinforce the work done by Ragn-Sells and what the company stood for.

“The recycling symbol is in the public domain, so when we use it, we do so in our own way, rotating the arrows a little in order to get a spin on the visual profile,” explains Folke Jackson. 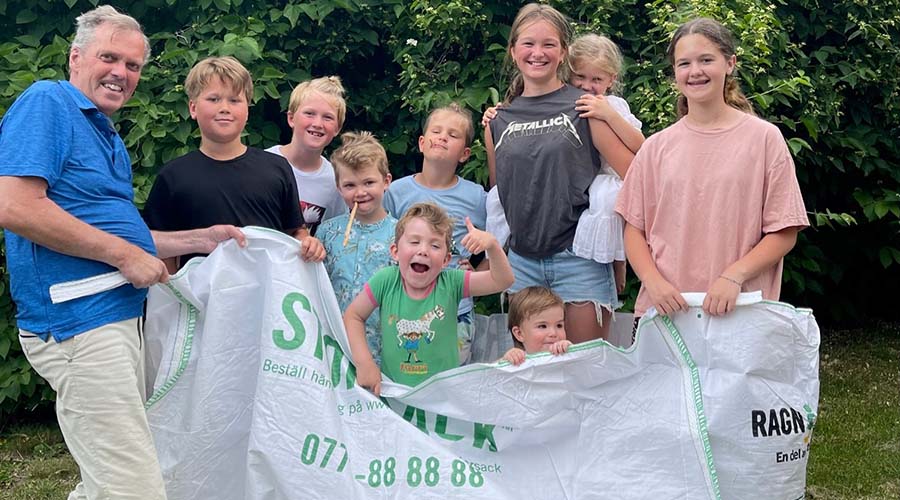 Folke Jackson was communications director at Ragn-Sells when the graphic profile using the recycling arrows came out in the 60s. The picture shows Folke with some of his grandchildren standing in a Ragn-Sells Storsäck (big bag).

The result of a competition

In 1971 the corrugated cardboard company, Container Corporation of America, announced a competition to design a recycling symbol. The winner was the recently graduated master’s student, Gary Anderson. Andersson used the prize money to study for a year at Stockholm University, and in an interview conducted by Stockholm University to mark the 50th anniversary of the recycling arrows, he said that he could never have imagined that the symbol would still be around for so long, or that it would be used and recognised internationally.

“We have had customers and colleagues in the industry calling to ask if they could use the ”Ragn-Sells arrows” in their marketing, which show how synonymous they have become with what we do,” says Folke Jackson in conclusion.