The major business operators Ragn-Sells and Posten/Bring are getting together with the aim of reducing traffic and creating a cleaner urban environment in Trondheim, Norway.

Elskede by (Beloved City) is a collaboration across industrial and commercial sectors with the aim of reducing emissions and vehicle numbers. The same environmentally friendly vehicles that carry packages into the city centre are used to take waste away.

The initiative was launched as “Älskade stad” in Stockholm in 2017, and since then it has spread to many other cities. Spring 2019 saw its arrival in Malmö and Oslo, and now it’s Trondheim’s turn.

The recycling company Ragn-Sells and the distributor Posten og Bring are breaking new ground in the distribution and collection of goods, waste and materials in Trondheim. The result will be fewer emissions, less noise, less traffic and a better environment.

On Monday 13th January, Elskede by in Trondheim was launched by the director of the city council’s environmental and commercial committee, Jørn Arve Flått. During the spring of 2020 the urban environment in Trondheim city centre will feature environmentally friendly bicycles and goods vehicles.

- Trondheim has ambitions to become a leading climate- and environmentally friendly city, and to do this we need the commercial world on our side. We are very happy that a number of major operators are up for reducing traffic and helping to bring about cleaner air in the city, says chairperson Rita Ottervik.

Elskede by will have a joint logistics centre at Nyhavna in Trondheim. Over the spring and summer of 2020, Elskede by will be trialled on the city streets, using environmentally friendly electric vehicles and electric cargo bicycles. 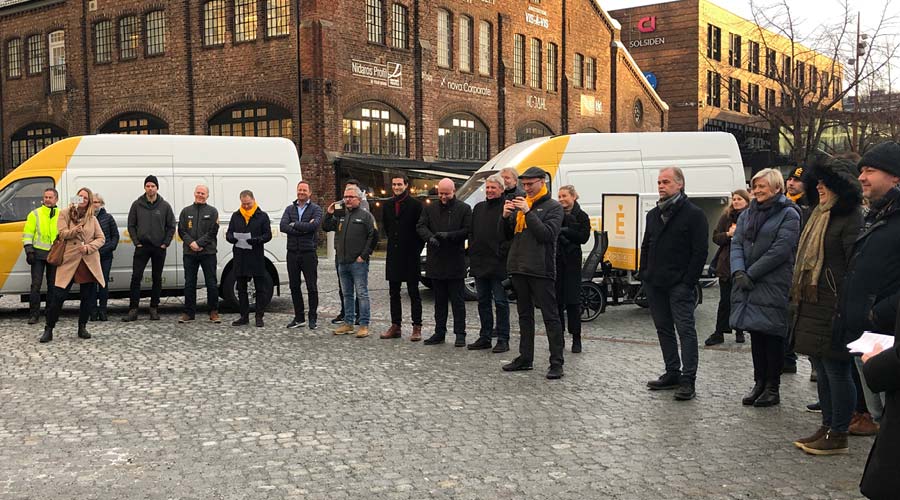 There was a large crowd in attendance when Elskede by in Trondheim was launched at Solsiden. (Photo: Ragn-Sells)

A good start in Oslo

Just a few months after going live in Oslo, Elskede by has led to a fall in the number of routes for parcel deliveries in Oslo city centre by four, and new environmentally friendly vehicles have resulted in 18 fewer fossil fuel vehicles on the city streets. The aim is for the CO2 emissions from these transports to be reduced by 70 percent by 2023. Even now, that figure is at 50 percent.

Jørn Arve Flått got to try out one of the electric bicycles that will be used in Trondheim city centre. (Photo: Ragn-Sells)