We take responsibility for the environment

Through our operations, we have both a positive and negative impact on the environment. Our conviction is that  waste is a resource and working both upstream and downstream is a prerequisite in creating circular material flows and to maximize the value of resources. The way we operate, how we manage risks, what we offer our customers and how we innovate is key to managing our environmental impact.

Ragn-Sells´ business builds on circular solutions and closing the loop of material flows. Many of our operations enable more material to be returned to the material cycle, with decreased production of primary resources as result. Our business can have a positive environmental impact by succeeding with making new resources out of waste and removing toxic components from the material loop.

Our approach to avoiding creating un-sustainability and contributing to keeping society within the planet’s boundaries through our business, is clearly outlined in Ragn-Sells business strategy.

The operational responsibility associated with the company’s environmental permits is delegated to the respective plant manager. At the facilities, the precautionary principle is considered when permits and specific terms are decided. Risk analyses are conducted continuously within the framework of the company’s risk management routine and according to the precautionary principle. Read more under Risk Management. 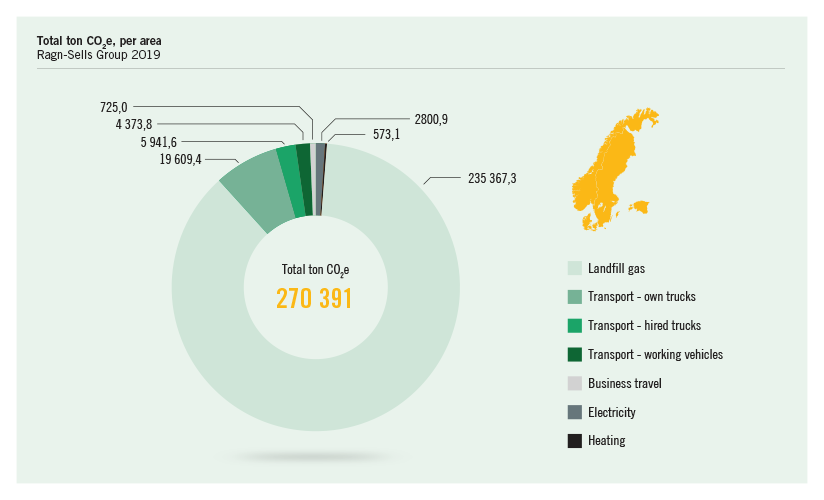 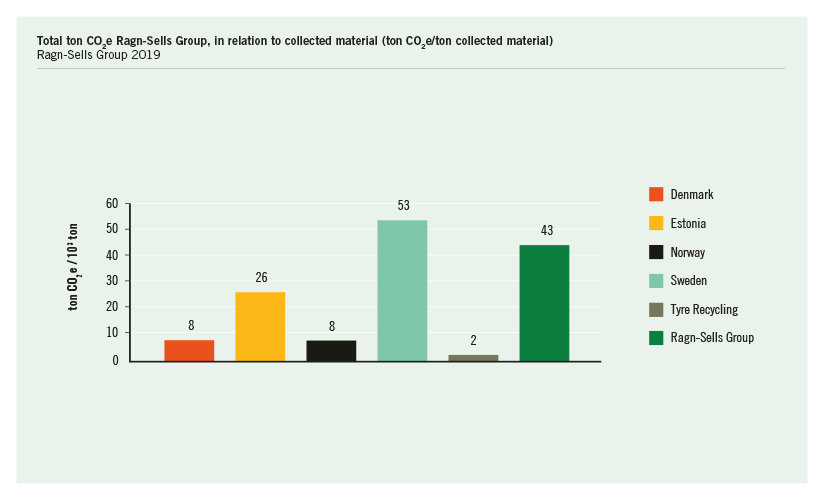 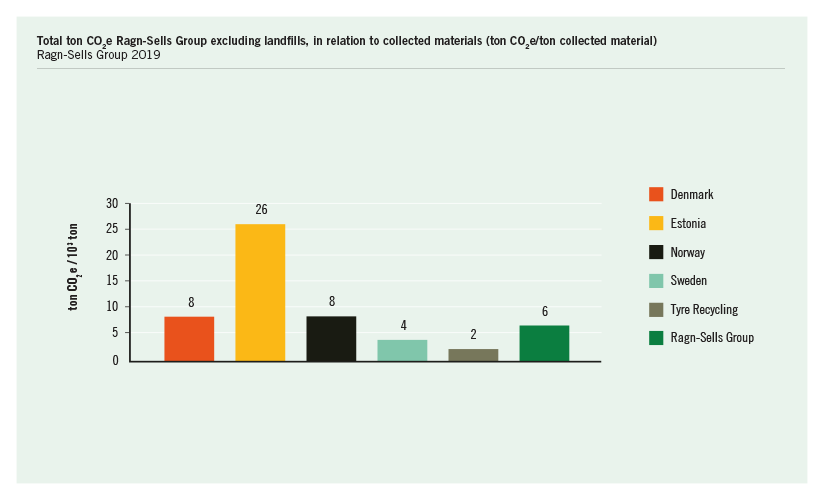 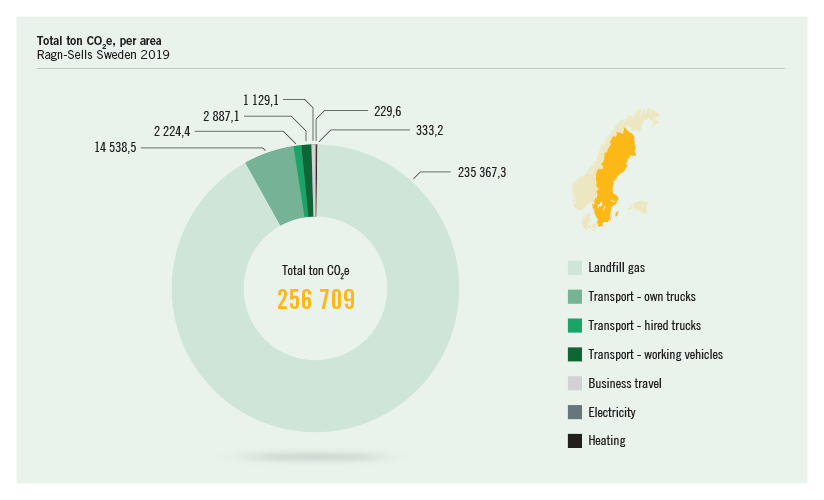 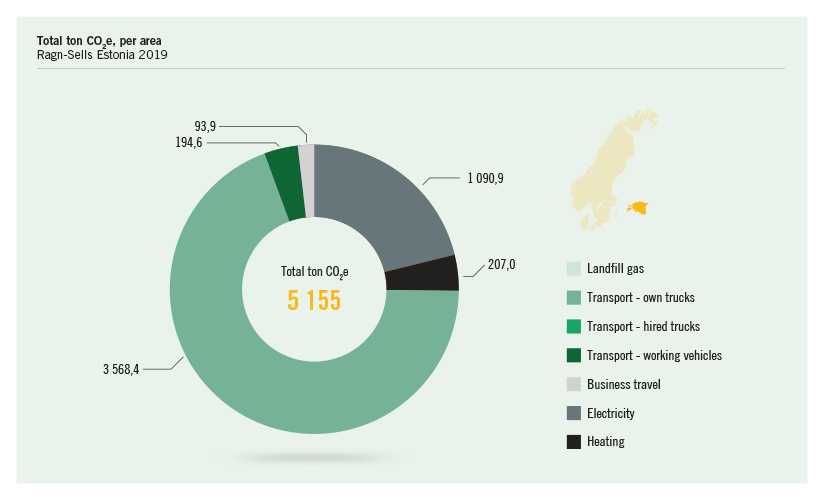 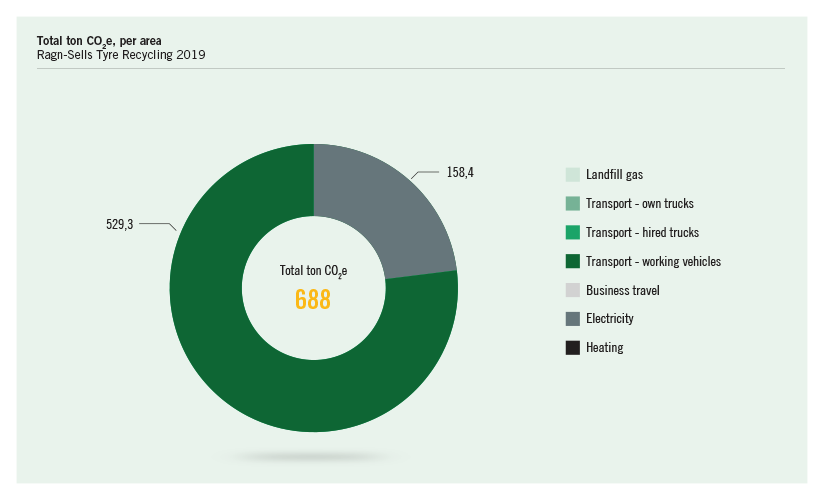 In the process of detoxifying the circular systems, safe landfills is necessary for certain types of waste. Ragn-Sells in Sweden owns and operates a number of landfills that are subject to environmental permits, which are continuously controlled by authorities and by our own self-control programs at the landfills.

While landfill gas is a potential environmental problem, it can also be seen as a resource. In 2019, Ragn-Sells collected and incinerated more than 40 000 tons CO2 equivalents at the landfill sites in Sweden. These efforts effectively collected the gas which can now be used for heating, cooling and to generate electricity. In 2019, Ragn-Sells landfills in Sweden generated 16 MWh. Read more about how Ragn-Sells analysis landfill gas emissions at the bottom of this site.*

"Our pioneering collaboration in Obbola will make an industrial landfill site one with nature through ecological restoration."

After landfills, Ragn-Sells largest environmental impact derives from our transports. Some of the measures Ragn-Sells Sweden has taken to decrease the environmental impact include eco driving, a review on route optimization, updating the vehicle fleet and replacing fossil fuels with renewable options. In order to achieve efficient control of the vehicle's fuel consumption, Ragn-Sells in Sweden is taking part in the large vehicle manufacturers' fleet management system. By switching to a greater share of bio-based fuels, we have been able to effectively reduce our climate emissions from transport.

Effluents to water and soil

Through our operations, Ragn-Sells contributes to effluents to water and soil, which have an impact on the environment. Therefore, risks associated with effluents is an important aspect for Ragn-Sells to control and evaluate.

In Ragn-Sells Sweden, effluents to water and soil derive mostly from treatment plants and mainly consist of metals, nutrients and oils. Measures are continuously performed at the different plants to reduce emissions to water, both by improving the measurement and control of water quality and by improving the water treatment processes. Ragn-Sells Sweden also participates in different co-operation forums for water collaboration and water conservation associations.

In terms of emissions to soil, the primary source is leakage of substances from the stored material, but outflows can also occur from spillage or leakage of chemicals and waste.

The cases below show; how we support our customers in environmental management and a concept for less emissions, less noise, less traffic and a better atmosphere.

Articles, Engagements, How we work

*How Ragn-Sells analyses landfill gas emissions – in brief
To calculate the emissions of landfill gases deriving from Ragn-Sells’ landfills in Sweden, the Landfill Gas Emissions Model (LandGEM) is used for all sites but one – which instead uses on-site measurements. Landfill gas is modelled to consist of 30% carbon dioxide (CO2) and 50% methane (CH4). The greenhouse gas methane, which is formed by means of the anaerobic decomposition of organic matter in landfill, is converted to CO2-equivalents using the latest emission factor from IPCC’s fifth assessment report: 28 kg CO2e/kg CH4. Carbon dioxide emissions that occur when landfill gas is flared, or is incinerated for heat and electricity, are not included in the calculations. The calculating model does not take into account to what extent the landfills are covered, resulting in the reported emissions probably being greater than the actual amount.